Prison writing is a valuable two-way process. Education aside many prisoners have changed their lives using writing as a bridge to a new life and career. Our first book in this genre was Bob Turney’s acclaimed I’m Still Standing back in 2002. Recommended personally by Lord Longford, Bob the one-time prolific burglar turned author actually went on to become a probation officer! Ex-offenders who followed his lead include Alan Weaver (who became a social worker, So You Think You Know Me?), Ben Ashcroft (young offender to youth worker, Fifty-one Moves) who tells of his constant changes whilst in care and Justin Rollins (ex-graffiti artist and now motivational speaker, The Lost Boyz and Street Crhymes) whose books have been adopted as set texts on degree courses in Birmingham and elsewhere.

Another ex-prisoner turned author whose book has been widely used in education is Frankie Owens whose Little Book of Prison also made the final of the People’s Book Prize. There is also a book, Recovery Stories, about those who have survived addiction.

Actor Stephen Fry’s turn around story was included in a collection called Going Straight along with that of the train robber Bruce Reynolds whose life changed after being released from his 25 year sentence. Andi Brierley who went from prisoner and heroin addict to specialist within a youth justice unit in Leeds is the latest in this considerable line-up with Your Honour Can I Tell You My Story?. Each of these books centres on identifying the changes, choices and threads that led from being an offender to law-abiding citizen. 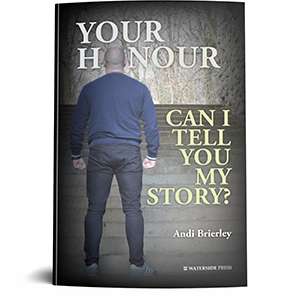