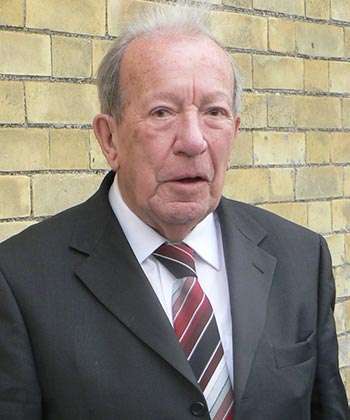 Leading Waterside Press author John Hostettler died in his sleep at his West Sussex home on October 23. He was 93. Always prolific in output, John only stopped writing a brief time ago having completed 25 published works.

I first got to know John through Barry Rose when I was co-editor of the latter’s flagship weekly journal Justice of the Peace to which John, by then a retired solicitor and still a magistrate, regularly submitted articles on criminal law. We both benefitted times over from Barry’s legendary hospitality, around book launches and other legal gatherings. John originally published under Barry’s imprint and latterly with us, ten books I think at the last count.

His best-known work is Sir William Garrow: His Life Times and Fight for Justice (written with Richard Braby a descendant of Garrow) which has been credited with bringing the lost story of one of England’s most important advocates to public attention. The award-winning BBC TV series that stemmed partly from the book ran for three series from 2009 -2011. I remember that when John first mentioned this work I told him it seemed to be largely a labour of love, but that we would put it out anyway despite the obscurity of the barrister he had written about, if only because of the other fine books he had written for us. I thought it would make it into specialist libraries. It turned out to be his biggest ‘hit’.

John was modest despite his achievements, in his legal career as well as his writing. With the pen he was expert, sending finely-tuned manuscripts, always well-researched and on time. Writing was his life I think, apart from home and family. Typically, his wife Joy was by his side when he visited Garrow’s former home in Pegwell Bay in Kent to unveil a Blue Plaque to Garrow at the request of the Ramsgate Historical Society. They would sometimes come to our offices together and I took it they were inseparable.

He was immensely proud of ‘rediscovering Garrow’, but also of the pioneering work he had done helping to bring about the abolition of corporal punishment in colonial prisons and his support for other civil liberties causes. He charted the abolition of capital punishment (with Brian P Block in Hanging in the Balance) and wrote a considerable if to date under-acknowledged work on political dissent (Dissenters, Radicals, Heretics and Blasphemers).

John, I think, liked nothing better than a leisurely lunch together with like-minded authors and crime buffs, reminiscing, putting the world to rights and bemoaning the ways in which the administration of justice is being daily diminished. His was a steady but solid attempt to preserve things that matter, to make sure the best justice possible endures for future generations – non-more so than through his writings.

He would, I do not doubt, be pleased to know that our nearby Wellington Arms in Stratfield Saye is being refurbished (in his honour I now like to think), whilst his favourite Loch Fyne in Winchester, where for some years we regularly met-up each year just before Christmas, is going as strong as ever serving his favourite fish courses. It is sad to think that there won’t be any more outings of this kind, but good to know that John Hostettler has left an important mark on the literary world. He has also left one work that has never seen the light of day, because we decided between us that the risk of an action for defamation, albeit spurious, was just too high. But I still have it, and you never know …