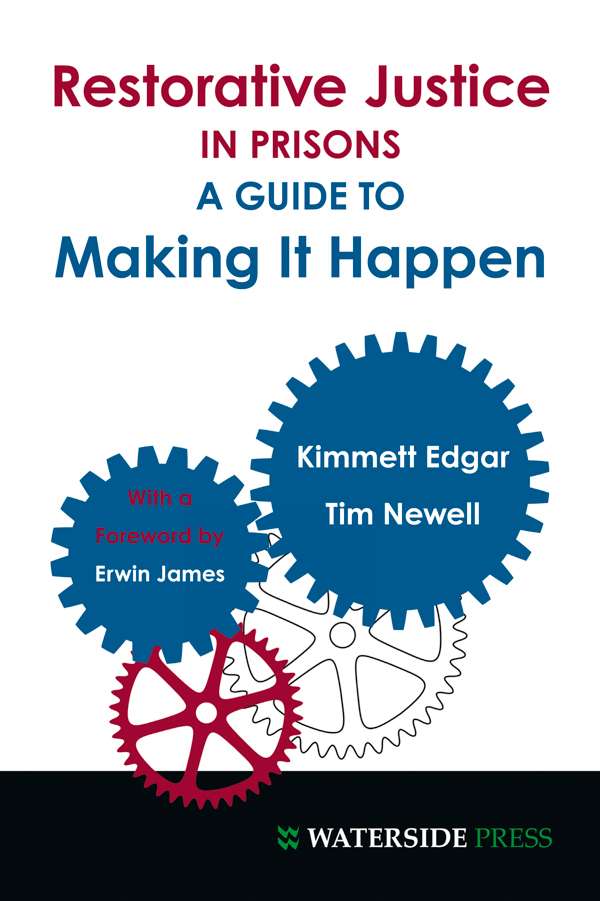 ‘This is essential reading not just for those interested in penal policy, but for anyone with a broader interest in effecting organisational change.’

‘This is a wonderfully useful tool for influencing policymakers towards a better system. Meticulously researched and rationally argued throughout, the authors speak direct to government, police and prison service on their own terms, neatly arguing that all those institutions will achieve their objectives, if they adopt the restorative approach …. This is a practical handbook, written by professionals … [with] a wonderfully reflective Foreword by Erwin James, a lifer, that will capture the imagination …. There are wonderful insights in this book as we would expect from two professionals who have devoted so much of their lives to work in our prisons. The small gestures of human feeling that pass betwen officers and inmates; the detailed case studies of violence; the experience of Belgian prisons; the damaging side effects of imprisonment and most impressively the list of prisons that have moved towards the restorative model. But it is the authors’ unerring grasp of current police, prison and government cultures and their confidence that these can be moved gently towards restorative justice, that makes this book so significant for prison reform’.

‘In the hands of creative and visionary correctional leaders, [this book] will inevitably serve to inspire and equip them toward meaningful and lasting change. For many people, the marriage of restorative justice and prisons is an unimaginable relationship – one destined to produce either still birth or monster child. Much of what has been written about restorative justice in the past can readily be characterized as a criticism of the power and processes embedded in the more familiar “find, prove and punish” criminal justice system we’ve become used to. At its extreme, some restorative justice writers define the concept in almost revolutionary terms – restoring to the average person the conflicts which have been stolen from them by their government. Any attempt to work with existing criminal justice players, from this viewpoint, is seen as undermining the true intent of the restorative justice movement.

On the other hand, for most societies, prisons have become the extreme embodiment of punishment. It is the most severe expression of control which the government can exercise over its population. In application, prisons have given rise to cultures which are largely oppressive – based on discipline, regimentation and control. On the surface, it seems the least likely candidate as a breeding ground for restorative justice. It is easy to imagine restorative justice dying under the weight of this oppression or being transformed into yet another tool to justify the control of the state.

At least, that is what it looks like in caricatured world.

Using the first two chapters to introduce some core theory about restorative justice, its application and potential role in prisons, the authors next venture into a comprehensive overview of prison cultures. By identifying an organizational culture web that consists of six dimensions (power structures, organisational structures, control systems, routines/rituals, myths/stories, symbols), they are able to isolate specific ideas and examples of how to affect broad based culture change within prisons. Moreover, the fifth chapter translates this into a more detailed description of a restorative prison and focuses on three key areas to illustrate how restorative justice could be brought to life. The sixth chapter identifies trends within the United Kingdom that seem to compel and support the evolution of restorative justice prisons in that country. In the seventh and final chapter, the authors offer key advice about areas that require special attention in pursuing the objective of restorative prisons.

More than a philosophical argument for restorative justice in prisons, Edgar and Newell draw heavily on their personal and professional experiences as well as on those of others. Their observations are grounded firmly in the real world. As their title suggests, the book compels one to action. While the frequent references specific to U.K. prisons can be somewhat disorienting to foreign eyes, the lessons that underlie them are universal. This book would be an asset to anyone interested in the evolution of prison roles. In the hands of creative and visionary correctional leaders, it will inevitably serve to inspire and equip them toward meaningful and lasting change.

‘A book of international importance . . . An authoritative guide’ This unique volume addresses a major gap in the already impressive range of literature on Restorative Justice. Not even the most comprehensive study to date, Sullivan and Tifft (eds.) A Handbook of Restorative Justice: a Global Perspective (2006), touches the critical issue of the place of restorative processes in prisons. Edgar and Newell’s persuasive and well-documented work is therefore of international importance.

Edgar and Newell are persuaded that restorative processes have ‘great potential to humanize prisons, improve safety, enhance social order, and make the experience less hostile and damaging for all concerned.’ They are also keenly aware that prisons can serve as sanctuaries in which prisoners are prepared for re-integration into civil society. But surely, some might argue, that is precisely what is happening in prisons already. After all, the Statement of Purpose for HM Prisons declares the duty to care for prisoners ‘with humanity and help them lead law-abiding and useful lives in custody and after release.’ But as the fascinating history of HM Prisons reveals, vision and reality do not yet fully converge. To be sure, the system has been changing in very profound ways over the past 250 years in response to new wisdom and societal understandings. (See, for example, Brodie, Croom and Davies’ illustrated Behind Bars: The Hidden Architecture of England’s Prisons, 1999). The book by Edgar and Newell is part of that creative process.

Ultimately, justice is about values, and it is these that the authors are particularly adept at exploring. Those in correctional professions will find themselves challenged to re-think the cultures of restraint and authority which characterize much of prison life. But they will be aided along the way by expert authors who fully understand the deep tensions inherent among contending philosophies of justice and correctional practice. The authors respect and explain the significant differences between the two major correctional approaches: RJ on the one hand, and what one generally refers to as ‘the retributive approach’ on the other. They reject the notion of some justice practitioners that RJ is a ‘soft touch’ that does not give criminals ‘what they deserve;’ they reject equally the notion of some RJ advocates who find prisons anathema. The authors do not see prisons and RJ as standing necessarily in opposition at all. Indeed, they remain convinced that the restorative focus on the stakeholders of any crime – victims, offenders, community, and indeed justice officials themselves – make it an ideal complement to the criminal justice system. Central to this view is RJ’s methods of problem-solving and dealing with trauma. A distinctive strength of RJ is its future-orientation that sets its sights on re-integrative and healing outcomes. It aims at harmony rather than merely order for its own sake.

The authors introduce their subject by defining Restorative Justice, examining its varieties of emphasis and approach, and elucidating the concepts of empowerment and particularity. The latter focuses on the unique aspects of each situation, and recognizes that no two situations of harm are ever precisely the same. This often calls for different solutions to apparently similar conflicts. Continuing in this vein, the authors compare RJ and the criminal justice system in the UK , and evaluate RJ and prisons. Subsequent chapters deal with ‘restorative values’ (such as healing, voluntary participation, inclusiveness and personal accountability), organizational culture (i.e. ‘the cultural web of prisons’), resistance to change (i.e. conflicting paradigms, social order in prison, cultural resistance within the police), and suggest a model for the restorative prison. The book blends both theory and practice. Thus it examines the foundations of a restorative prison, operational applications of RJ, restorative work in pre-release and complaints, responsibility in sentencing, and the National Action Plan to Reduce Re-Offending. It concludes with clear guidance for criminal justice agencies and summarizes the experience of using restorative methods in prisons. Appendices provide case-studies, and a glossary of terms.

One area receives rather less overt attention than others: the role of faith traditions in RJ practice. Perhaps this is because the demographics of the UK do not yet reveal a significant level of pluralism and multiculturalism. Yet, if media reports are any indication, that time will come very soon. Meanwhile, countries like New Zealand and Canada have led in this field in both theory and practice. Here the Handbook, mentioned above, devotes a number of chapters to the diverse spiritual foundations of RJ, to multi faith reflection on crime, and on justice as sanctuary. These chapters recognize RJ as a spiritual process that can transform persons, situations and institutions. That said, these understandings underpin the volume by Edgar and Newell. The authors are implicitly aware of the bedrock foundations on which their arguments rest. Their book on Restorative Justice in Prisons is an authoritative guide to making it happen.

For more information and to order, see Restorative Justice in Prisons.