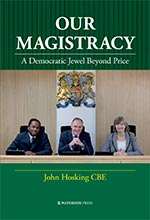 About two thirds through this book a section heading reads ‘A Jewel Beyond Price’ or ‘A Bunch of Amateurs?’

The first is a quote from Lord Chief Justice Bingham and the second from an Open University report. Of course, the magistracy is both. Magistrates are undoubtedly a bunch of amateurs that has been functioning for over 650 years: ordinary men and women including very few lawyers, who sit in court about 50 half days a year trying the crimes and misdemeanors for (mostly) the less serious offences. If the plea is Not Guilty they decide, as do juries, on a verdict of either Not Guilty or Guilty beyond reasonable doubt; and if the verdict is Guilty they decide on a suitable punishment taking into account the seriousness of the offence. They usually sit for half a day at a time and are aided when necessary, but rarely, by the clerk of the court who is a lawyer.

To act as judge and jury, to decide on a verdict and when appropriate pass a suitable sentence is a remarkable burden for a bunch of amateurs. They are much better than juries, but then magistrates are trained whereas juries are not.

I have visited, as a member of the public, a number of lower courts in other countries, where every participant except the accused is a lawyer. Police, usually armed, are often present and the proceedings are often sloppy; one judge at the beginning of a trial for a minor offence saying, ‘Let’s get this over quickly ‘cos I wanna go play golf.’ In another court when a defendant was fined a hundred dollars a lawyer sitting next to me said, ‘He can’t pay that. He’d have trouble paying ten dollars, so he’ll go to prison for a month.’ Which he did. In another court in another State I watched a case where a police officer was charged with wrongly entering a private house to make an arrest. The case lasted about two hours, the officer was clearly within his rights and the lady judge, throughout, paid more attention to her fingernails than to the proceedings which came to a merciful end with a Not Guilty verdict.

Our bunch of amateurs are far more professional, and far more knowledgeable than most country’s professionals. A number of books have been written about the magistracy, mostly favorable, but none as good as this one which can be described by the book’s own sub-title: A Democratic Jewel Beyond Price. It is beyond reasonable doubt that every serving magistrate should have a copy.