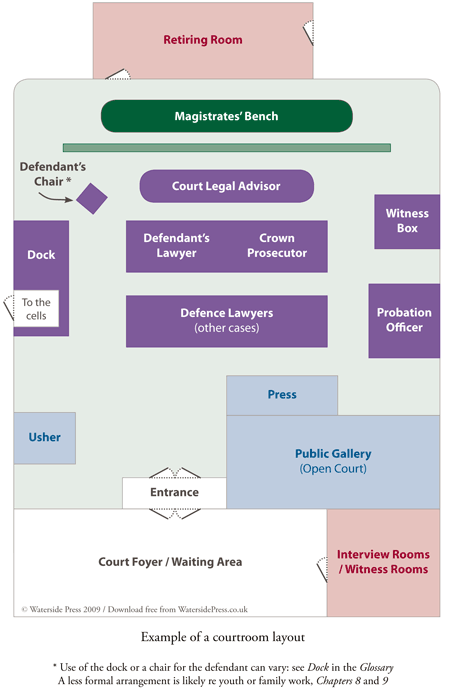 This is a simplified view of a typical magistrates’ court layout. Most courtrooms are fairly similar, featuring the central and dominant magistrates’ bench (which is often raised on a platform). Between this and the lawyers tables for the prosecution and defence there is space for the court legal advisor.

To one side there is the dock, or alternatively a chair for the defendant – the use can vary (see Dock in the Glossary). For security, defendants in custody usually arrive through the cells. Witnesses are called to their own stand.

Other designated areas are for a probation officer, court usher, press and general public (in open court). Outside the courtroom there will be a foyer and rooms for witnesses and interviewing. 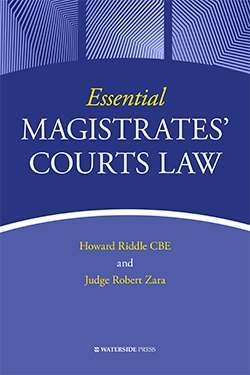 This diagram is part of a set of three such helpful diagrams which can be freely downloaded in PDF format. The other two charts can be viewed here: Sentencing Framework and The Courts Heirarchy in Outline.

Download the PDF here (To view these files you will need the free Adobe Reader available from Adobe).

This diagram is taken from The Magistrates’ Court: An Introduction (5th Edition, 2009) by Bryan Gibson and Mike Watkins.

We noticed you're visiting from Japan. We've updated our prices to Japanese yen for your shopping convenience. Use Pound sterling instead. Dismiss