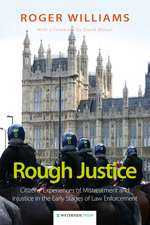 Sussex former Chief Constable agrees 75% of PINs were inappropriate
PINs issued were not monitored although they were 4 x greater per head than G-M Police force
Author seeks justice for himself and those who were inappropriately ‘PINed’ by Sussex Police.

The author of the recently published book Rough Justice: Citizens’ Experiences of Mistreatment and Injustice in the Early Stages of Law Enforcement, Roger Williams, has unsuccessfully fought Sussex Police for three years trying to get his inappropriate PIN (Police Information Notice) corrected. Although he alleges over 50 breaches of Sussex Police’s ‘Duty of Care’, numerous errors in procedure and has written to the Chief Constables on several occasions, Sussex police concluded the unequal struggle by ‘disapplying’ Williams and refusing to investigate the case because ‘it would cause an injustice to the officers involved’.

Angered by the injustice, Williams sought contributions from other disaffected victims suffering injustices at the hands of the police from around the country and wrote his hard-hitting book. A ten-page summary was sent to the Home Office in response to their invitation for contributions to their Police Integrity Consultation. The book was published in March 2015 by Waterside Press.

Williams now intends to recommence his fight for personal justice and closure and hopes to do the same for maybe thousands of other victims of Sussex police’s inappropriate PINs. He experienced at first hand the ordeal a PIN brings with it and how the distress multiplies when the PIN is unjustified. Consequently he invites victims in receipt of a PIN from Sussex police between 2009 and December 2014 who believe it to be inappropriate and/or to have procedural shortcoming to email him. He intends to assemble a mass application requesting all unjustified victims receive –

and invites anyone who feels they received an inappropriate PIN to get in touch with inappropriatepin@gmail.com He anticipates there could be over 4000 replies and consequently requests applicants are brief, provide their name, address, date of PIN, issuing police officer and collar number (where known) and no more than about 3 or 4 lines of explanation as to why they think their PIN was inappropriate or did not follow procedures as detailed by acpo.police.uk/documents/crime/2009/200908CRISAH01.pdf (alternative link if that one fails ACPO Practice Advice on Investigating Stalking and Harrassment 2009) (both external links).

Williams will also welcome your suggested compensation should Sussex police subsequently agree that your PIN was inappropriate.

PINs seem a most unsatisfactory method of administering justice particularly if the police interpret the guidelines very ‘loosely’. During the latter part of 2014 and winter 2015 Parliament debated Sussex police’s use of PINs and several Select Committee hearings took place. The last and perhaps most telling was on 13th January 2015 when The Home Affairs Select Committee (HAC) took oral evidence revealing the uncomfortable facts headlined above. It was also explained to the HAC that a gap had developed between the original 2009 intention of the practice and its later use.

Endorsing this finding, Williams confirms there were over a dozen initial procedural irregularities with his PIN in 2012 when measured against the ACPO 2009 procedure (above). He was particularly concerned that the issuing officer was empowered to act entirely on his own initiative because no supervisory name or signature was affixed to the PIN and that Williams’ PIN was even delivered illegitimately.

The guidelines were tightened in 2014 but nevertheless Sussex police still relied heavily on the fact that they were judge and jury and, it seems, rarely consulted with the recipient as required by the procedure, before issuing their Notification. And there was and still is no appeal. Williams spent most of the next two years fighting his PIN via a series of police complaints and letters to the Chief Constables but it seemed that once the initial error was made and the PIN issued, Sussex police’s Professional Standards Department put all their energy into rebuffing, possibly covering-up complaints by a variety of means not excluding ‘losing’ the file.

Roger Williams’ book suggests radical proposals designed to put an end to the local police ‘investigating’ their own. The book is constructively critical of the IPCC and includes a number of radical proposals to hopefully generate a serious discussion as to what remedial actions should be taken. Police and Crime Commissioners are critically examined. Put simply this author sees them as a failed experiment but the country will have an opportunity to express its opinion in Autumn 2016 when, presumably, PCC elections will held. The residents of Sussex will no doubt consider how helpful their PCC has been and how well she has monitored the performance of her Chief Constables, particularly in the light of the former Chief Constable’s revelations at HAC in January.

Rough Justice: Citizens’ Experiences of Mistreatment and Injustice in the Early Stages of Law Enforcement by Roger Williams is available now.