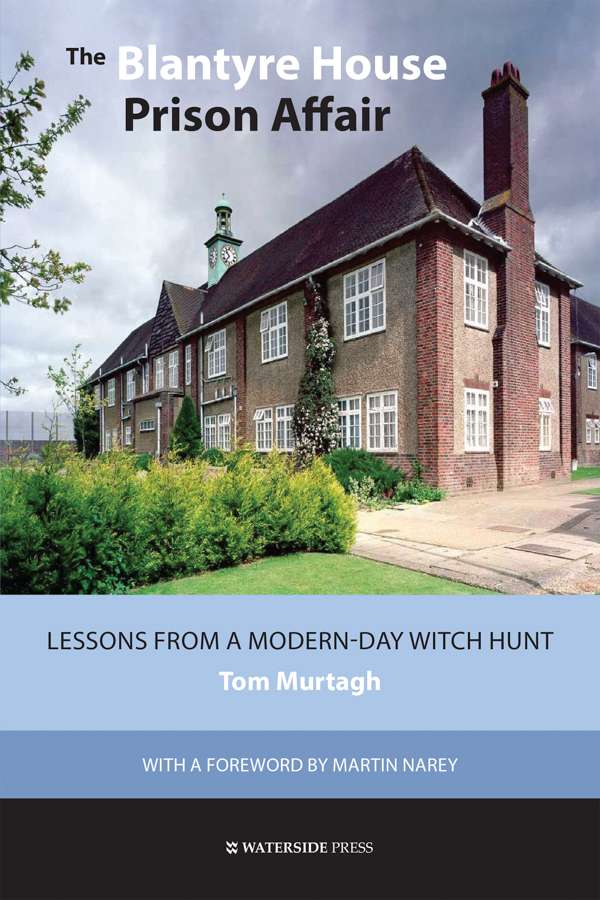 [Murtagh is] convincing in his assertion that the blame for the situation at Blantyre House was misdirected and presents sound evidence to show that the ideas behind the prison are sound, if applied correctly to the appropriate people.’
Reference & Research Book News (USA).

‘What this book does very effectively is make you think about all that goes on in prison in spite of the intended regime. It raises a number of issues: human rights versus enforcement; should career criminals be offered resettlement; how rich criminals can potentially corrupt staff; and whether politicians contribute light or heat to any debate about prisons. Blantyre House is a good place to start thinking about prisons.’
The Magistrate

‘A strikingly interesting and well written book’
Justice of the Peace

‘I was emotionally gripped by this book as soon as I had began reading the foreword by former Director General of the Prison Service, Martin Narey. His courageous introductory piece sets the scene for what follows – an absorbing and most disturbing account of events and controversy that began at one of the UK’s less well-known (and happily less notorious) prison establishments in 2003, and then developed to engulf the author – Tom Murtagh – then area manager for the Prison Service in Kent, Surrey & Sussex.
This, of course, is the story as seen and told from one person’s perspective – the person who came to be at the very centre of events. But the way Tom Murtagh tells it – with careful chronology and detailing of those events, will surely leave most readers with the view of the aptness of the author’s chosen sub-title ‘… a modern day witch hunt… ‘. In successive, and equally fascinating, chapters, Mutagh tells how, from initial hushed suspicions and warnings within the privacy of the internal management of the Prison Service, the saga took on a life of its own, and culminated in the very public arena of the committee rooms of the House of Commons, with the Home Affairs Select Committee ‘… seemingly beguiled by prisoners and supporters of the former governor… ‘, subjecting the author, Martin Narey and Prisons’ Minister, Paul Boateng to, what Murtagh describes as ‘… harsh and quite baseless criticism… ‘ for the actions taken’.
John Raine, Vista (July 2007)

‘This is a story that needs a public airing no matter which side the reader finally comes down on. Blantyre House… found itself at the centre of a scandal’.
The Rt. Hon Ann Widdecombe MP, former Prisons Minister

‘Tom Murtagh’s actions ‘not only preserved all that was good about the Blantyre regime . . . but may have saved my job and perhaps that of the Home Secretary.’
Martin Narey, Director of Barnardo’s and former Director-General of HM Prison Service – from the Foreword

‘..sounds a warning about the effectiveness and legitimacy of our institutions and for public accountability as a whole.’
David Faulkner CB, Oxford University Centre for Criminological Research