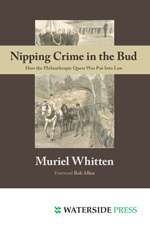 by Muriel Whitten author of Nipping Crime in the Bud. October 2010.

Philanthropy comes in many guises. Sometimes springing simply from kindness or a desire to increase the well-being of mankind it has had a very long history. So too has the Philanthropic Society whose contribution to the development of criminal justice policy deserves close attention. Founded in 1788, as crime and disorder reigned around the streets of London and caused its good citizens to fear for their persons and property, this was the very first charity to take crime prevention seriously. Nothing else seemed to work. Even the Bloody Code of penal law had not prevented crimes being perpetrated in the shadow of the gallows. Just as worrying, hordes of homeless and neglected boys and girls survived only through stealing and begging at a time when any one of them could be sentenced to death for committing a felony and left to moulder in prison if charged with vagrancy or misdemeanour.

Believing it their civic duty to solve social problems in practical ways, the Philanthropic Society’s founders set out to nip crime in the bud and demonstrate to the nation how children at risk of such fates – and those who already had experienced the terrors of the law – could be rescued and given the means to earn honest livelihoods. Amongst the personalities involved in this crime prevention experiment in the early years were the grand old Duke of York, Sir James Sanderson (Lord Mayor of London), Middlesex magistrate Jeremiah Bentham (father of Jeremy), Dr. James Sims (President of the London Medical Society) and prison reformer George Holford (who supervised the construction and management of Millbank Penitentiary). His fellow Members of Parliament, Samuel Whitbread and William Wilberforce also lent support.

Initially providing education, training and employment in family houses scattered around the village of Hackney, by 1793 the enterprise had re-located into newly built premises at St. George’s Fields in Southwark. With a separate Female School, a Reform department for criminal boys and a Manufactory for others created, the Philanthropic Society’s innovative institution soon gained the admiration of a host of visitors from home and abroad. The children maintained within its walls also provided trustees with ample evidence to prove that the task of moulding model citizens was not an easy one.

By the time it decided to establish a Reformatory Farm School experiment at Redhill in 1848, the Philanthropic Society had commenced specialising in the reformation of criminal boys. Its mode of operation also had attracted the attention of Home Secretary Sir George Grey who was keen to explore whether a union of state and voluntary effort could stem a rising tide of juvenile crime. Having been found to deliver good value for the public money expended on criminal boys sent to Redhill by Home Office Prison Inspectors, Sir George did not hesitate to appraise Parliament of the Reformatory Farm School’s success in reducing re-offending. Its reformatory merits were likewise promoted by a zealous network of campaigners in pursuit of a less punitive statutory disposal for youthful offenders than that afforded by imprisonment. They included Charles Dickens, statesman William E. Gladstone and Mary Carpenter, all of whom journeyed to inspect the Reformatory Farm School, as did the Society’s patron Prince Albert. When the Reformatory School Act was passed in 1854, its provisions embraced many of those tested by government in partnership with the Philanthropic Society. The Reformatory Farm School’s Superintendent, the Reverend Sydney Turner, was appointed the first Home Office Inspector of Reformatories in 1857. That same year saw the Industrial Schools Act reach the statute books and provide for homeless and neglected children at risk, such as those taken under the Philanthropic Society’s protection in earlier years.

By 1970, the buildings on the Redhill site comprised one of the largest residential campus establishments in the UK to which local authorities could refer young people in trouble. Yet by the early 1980s, as new ideas on community care gained hold and cuts in government funding imposed restrictions on referrals, the trustees of the now Royal Philanthropic Society (RPS) found their charitable resources tied-up in maintaining very few boys. Having decided to sell the Redhill property and put the proceeds to use in innovative ways, the RPS consulted with other longstanding charities, such as the Coram Family, Barnardo’s and Action for Children, whose residential services had also retracted. Finding gaps in provision for vulnerable young people leaving local authority care, it then took its first steps into the community by developing supportive schemes in partnership with housing associations and social services departments. Together with juvenile justice agencies, it also initiated bail support schemes for young offenders who might otherwise have been remanded from court into custody.

In 1997 the RPS merged with another longstanding charity whose roots resided in the 1870s when Frederick Rainer donated five shillings to the Church of England Temperance Society in the hope that something could be done to prevent offenders spiralling downward into hardened criminal careers. His philanthropic contribution helped fund the provision of the first London Police Court Missionaries (LPCM), who were given statutory powers of supervision under the Probation of Offenders Act in 1907. Re-named the Rainer Foundation in 1960, the LPCM by then had acquired extensive expertise in preventing youth crime and re-offending through supported housing, training, employment and mentoring schemes in partnership with probation services, local authorities, commercial businesses and other charities. With RPS/Rainer formed upon this union of voluntary effort, the Philanthropic identity was masked in 2003 when the charity became known as Rainer.

In 2008 Rainer merged with Crime Concern, a crime prevention charity set up on the initiative of Home Secretary Douglas Hurd in 1988. Primed with Home Office funding and aiming to extend the role of crime prevention beyond the remit of professional police, its innovative schemes for creating safer communities were developed in collaboration with local authorities and in partnership with young people, their families, friends and private companies. Re-branded as Catch22, this newly forged charity now provides for nearly 40,000 young people (aged 10 to 25) who find themselves in difficult situations in 150 communities across the UK. It also forms part of the consortium which has signed the first prison building, management, through-care and resettlement service contract awarded by the Ministry of Justice to an alliance of the private and voluntary sectors.

Catch22’s mission to ‘promote opportunities for the development, education and support of young people in need to lead purposeful, stable and fulfilled lives and to create safer, inclusive, crime-free communities for the benefit of the public’ still closely echoes eighteenth-century ambitions. We can imagine, nonetheless, that its manifestation in these twenty-first-century innovations would have absolutely astounded the Philanthropic Society’s pioneering founders.