Test your knowledge with our free crime and punishment quiz. To see the answers simply touch the screen or hover your mouse over each Answer (below). This quiz is just for fun – there are no prizes or forms to submit. Please let us know if you enjoy it or find it useful.

1. Who was the first recognised ‘boss’ of organized crime?

2. ‘Clip around the ear’ refers to

(a) a haircut which was popular in the 1950s;
(b) an electronic tracking device used by sheep farmers; or
(c) a reprimand by a police officer?

Answer(c) Reputedly in the early-mid 20th century police officers would sometimes assault young offenders by hitting them around the head ‘up a dark alley’. The term is now used metaphorically, mainly with regard to youngsters.

3. How many ordinary magistrates (what used to be called ‘lay magistrates’) are essential for there to be a properly constituted magistrates’ court?:

Answer(b), exceptionally (a) where matters are reserved to ‘a single justice’. Also, a district judge (magistrates’ court can sit alone) but he or she is not an ‘ordinary magistrate’, so (a) is the correct answer. The term ‘lay magistrate’ is now discouraged by the Ministry of Justice.

(a) arguing the toss in public;
(b) bleeding from a knife wound; or
(c) a form of distraction burglary in which the victim is asked to fill a bottle or can with water for a passer-by.

Answer(a) Historically, it was a form of public debate-cum-entertainment in taverns and the like, often engaged in by lawyers and would-be politicians.

5. In what year did Bow Street Magistrates’ Court open its doors for the first time?

Answer(b) and Bow Street court closed its doors in 2007.

6. What is the minimum number to which a criminal trial jury can fall before the proceedings must be abandoned?

7. The Cato Street Conspiracy involved a scam in which a racehorse was switched by painting another horse black.

AnswerFalse – It was an attempt to blow up the Prime Minister and Cabinet, in 1820

8. The first Statute regulating magistrates was passed in

Answer(c) The Justices of the Peace Act 1361, parts of which remain in force.

9. The Association for the for the Improvement of Female Prisoners was first suggested by

10. Where was Tyburn Tree located?

Answer(b) Close to Marble Arch as it now is.

11. How much is the victims’ surcharge?

12. Which Home Secretary attended the Siege of Sidney Street?

13. Where is the national Police Memorial?

(a) near The Mall;
(b) outside the Libyan Embassy?;
(c) off Trafalgar Square;
(d) in Regents Park; or
(e) outside Scotland Yard.

Answer(a) just off the Mall, as campaigned for by the film director Michael Winner

(a) the first women governor of an Holloway Prison;
(b) a murder victim; or
(c) the last women to suffer capital punishment before Ruth Ellis?

Answer(b) Fanny Adams, a girl of eight years, was murdered by a solicitor’s clerk ain 1812 at Alton, Hampshire – giving rise the term ‘sweet Fanny Adams’ (or ‘sweet FA’ for short).

(a) one selling domestic utensils under licence;
(b) one set up by way of a fraudulent deception with the intention of fleeing once monies have been received; or
(c) Ned Kelly’s milliner?

16. Which King of England wrote a treatise on witchcraft and demons?

(a) flown over a prison when a sentence of capital punishment had been carried out;
(b) the traditional symbol of Islam;
(c) used by pirates, especially in the West Indies;
(d) the name of an American Punk Rock band of the 1970s;
(e) a pennant used by insurgents and revolutionaries from time to time?

AnswerAll of these are correct. As to (c), the Black Flag was often an alternative to the Jolly Roger.

19. Under which Statute can a witness insist on making an affirmation rather than giving sworn testimony from the witness box?

Answer(b) The other two do not exist.

20. The only person in the UK to survive capital punishment because the trap failed to open on three consecutive occasions is

Answer(C) John Lee at Exeter Prison in 1885. He was also known as ‘John Babbacombe Lee’. His sentence was commuted to one of life imprisonment and after his release he disappeared after emigrating to the New World. One explanation is that the boards softened in inclement weather so as to spread when stood upon, making springing the trap with someone stood on it impossible. There are other rare instances from around the world, including in 2009 in the USA when after three attempts to find a vein for a lethal injection the execution was abandoned.

Answer(c) under Commissioner Edward Henry around 1900.

22. A famous case of English law involving cannabilism on the High Seas in order to survive is that of?

Answer(d) After being sentenced to death there was a public outcry and the sentences on Dudley and Stevens were commuted to six months apiece.

(a) a brand name;
(b) originally the acronym for Target And Stop Every Robber;
(c) the name of its inventor.

24. The breathalyser was introduced in

Answer(b) or possibly (c). Explanation: (a) is the USA version under which imprisonment follows automatically for a third (listed) offence. (b) represents English law; (c) represents the zero tolerance approach of some law enforcement agencies who prosecute the first-time someone is caught rather than consider a caution or other forms of diversion from prosecution. 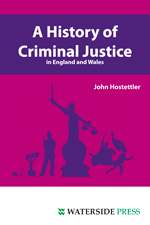 Test Your Knowledge of Crime and Punishment (No.1) © Bryan Gibson 2009.

Thousands more data and facts appear in our selection of Legal History titles, including A History of Criminal Justice by John Hostettler.