Buy: Google PlayHelp
How to read the ebook

Plus other sellers - search the web by format: PDF

In this sequel to I’m Still Standing, ex-burglar Bob Turney tells of how he went from being wanted by the police and criminal underworld to being wanted for himself. It is an intriguing story of his journey from prisoner to upstanding citizen, husband, father, probation officer, author and broadcaster – told with self-deprecating humour, insight and deep concern for victims of crime in particular. He writes of life on both sides of the tracks and at each end of the social spectrum – and of how an educationally subnormal, dyslexic schoolboy grew up to take a degree, join the speaking circuit, become an author and have his writings adopted as core reading for university students! Wanted! is an entertaining work that is packed with unusual perspectives and insights concerning crime, criminal justice and penal affairs. It is also a work of hope and encouragement as Bob Turney tells the story of how he escaped from the wrong turnings and false values of his youth into a new life. Wanted is a book rich in insights, experiences, contrasts and messages about crime and punishment – and from ‘both sides of the tracks’.

‘Turney writes with authority on a subject about which many people have very strong views but little personal experience’: Internet Law Book Reviews 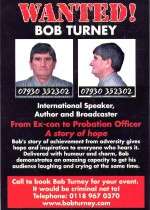 Bob Turney’s I’m Still Standing (Waterside Press, 1997) has been through several reprints and ranks as a classic within the ‘going straight’ genre. Writing in his own laconic style, in this sequel Bob now explains how he has progressed from being ‘wanted by the police’ to being ‘in demand’ as a writer, broadcaster, commentator and public speaker across criminal justice networks in the UK and abroad. He describes how events have taken him to such places as the House of Lords, Oxford Union, Eton College and prisons across the land in a new role – and he tells of the people he has met along the way often ‘mixing’ their perspectives with his own from his ‘past and present lives’. Few ex-offenders can say that they have been saluted by the policeman outside No. 10 Downing Street, become a probation officer, acted as chauffeur to the late Lord Longford, collaborated on a film project with a reformed Great Train Robber or rubbed shoulders with Archbishop Desmond Tutu.

Be the first to review “Wanted!” Cancel reply