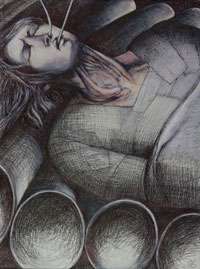 by Hilary Beauchamp author of Holloway Prison: An Inside Story

Inmates would bring into the classroom photos of partners and children for me to draw, or attempt to employ me as their own individual portrait painter. Succumbing to this sort of pressure would have reinforced the erroneous criticism that the arts were a soft option. Other quick fixes would have satisfied students when prison inertia was at its most virulent. Having been ticked off in the register, which assured them payment for that session, some women became indifferent to the real purpose of their visit. So in a way I made life more difficult for myself by making life more difficult for the students.

That’s why tracing paper was a banned material, my own banned substance that most students were made aware of right from their first lesson. It was my one notorious prohibition that novices soon heard about from more experienced students keen to pass on this bad news. And if I heard a crackling and a scrunching noise coming from some student hiding at the back of the class, I would know she had acquired greaseproof paper in some illegal deal with a cookery student.

Women having woken that morning on the wrong side of the wall and in a fighting mood need only ask for tracing paper. Caught off guard myself sometimes by my own kind of grumpy morning, my refusals would climb the scale and very nearly break glass. Hands over their ears to silence me and having twisted the key to their satisfaction, they’d wind me down with a grin and a wink to their mates, leaving the clockwork toy well and truly frazzled. The fight was always to teach up, stretch the mind, provoke thought, instil skills, cultivate observation, encourage independenceand accelerate maturity.

I was often asked by the inmates if they could see some examples of my own artistic efforts.

“Does she practise what she preaches?”

I deflected the inquiries and quickly moved on. I’d been stung years before and didn’t want to repeat the experience.

When evening classes still took place, I held an “Art Appreciation” class. Evening classes were of value to the convicted women who were obliged to work during the day. It was their opportunity to re-engage with education and it is a shame those classes no longer take place. I called it “Art Appreciation” and nobody turned up, until we decided to call it “Looking at Pictures”, then women started to enrol. I thought I’d sneak one of my own slides in, so I slotted a Hilary Beauchamp in between a Mondrian and a Brigitte Riley, a chalk study of coral, interpreted in bright colours, of long angular shapes weaving around the paper.

The illustrations in my book, hopefully they will receive a better response. 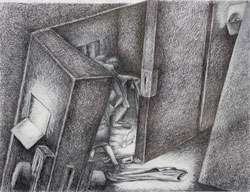 by Hilary Beauchamp author of Holloway Prison: An Inside Story

All the drawings were created from memory. They were inspired by the odd remark from an inmate, a story, or as a reaction to some feelings that had formed a picture in my mind. I tried painting them with colour, in paint, but the softness of the brush seemed inappropriate. It seemed decorative and too diverting. Besides I never remembered the scenes in colour, they were always black or grey.

I scratched away in black pen and when I made a mistake I painted over the error with white paint and scratched over that. At the beginning I used quite expensive artist’s pens with delicate fine nibs making even black lines. But they easily got clogged up with all the white paint and the over-drawing. Only a cheap prison biro could negotiate the battered surface of the paper. Those Holloway biros can ride over layers of paint, rectify any error and never wear out. They are sturdy and ruthless and produce a rich, velvety and dense mark. When I used red in an illustration, it was blood-that’s-all-blood-red. Yellow was light, chemical electric yellow. The drawing of two women fighting seemed better represented by the two complementary colours of red and green, two opposing colours, two hostile forces.

Holloway prison is the largest female prison in Europe and probably the most notorious. Sixty per cent of the women in Holloway stay for less than 28 days. An exhibition was held at the Morley gallery in 2000 to celebrate the millennium. The idea was to demonstrate, in visual terms, the high turnover of women prisoners in Holloway. Each student was asked to make one drawing within a period of one month and each effort was exhibited regardless of quality. All new students in the art class were asked to arrange themselves on chairs in a circle one behind the other. This provided each student with the back view of a model whose identity could be preserved. One-hundred and sixty-nine portraits were completed. The same number of drawings were exhibited and 169 new students were admitted into the classroom that month. That doesn’t educate a nation but we can start the ball rolling.

There was one conceptual piece of art displayed. I discussed the exhibit at length beforehand with the inmate who was surprisingly pragmatic and enthusiastic about this challenge. She chose to spend her sentence in isolation forming no friendships and keeping any social interaction down to a minimum. Her fellow inmates kept their distance because they didn’t understand this silent and distant inmate. Only the staff could relate well to her, she in turn caused them no trouble. She had one enemy, one target for her torment and that was herself only herself.

We made a small box in which to display a group of objects that at one time she had inserted into her body. She became thoroughly involved with the accuracy of this project seeking exact likenesses of pen nibs, pieces of glass, nails, drawing pins etc. Beside the box she drew her torso, mapping out where she had pushed the objects, which part of her skin, which orifice, where they had travelled and where they exited. If they had been removed surgically then she counted her stitches and pencilled over the scar. Framed and fixed to the wall in the gallery this mutilated body was a shocking reminder of how damaged some woman are, how complex are their problems and what massive resources are needed to heal them.

Cherie Blair opened the exhibition when she was pregnant. One of the inmates knitted her a baby jacket with HMP Holloway embroidered like a logo on the front.

Illustrations mentioned in this article and many more can be viewed and purchased at Hilary Beauchamp’s personal website: HilaryBeauchamp.com

Holloway Prison: An Inside Story is now available in paperback.