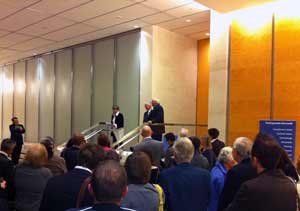 We would like to thank those at the Howard League who not only allowed us to join their event but were also so helpful on the day.