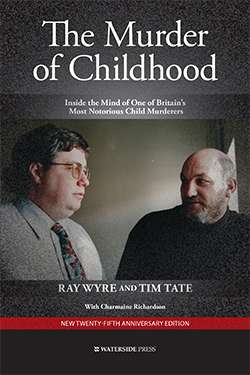 The Murder of Childhood: Inside the Mind of One of Britain’s Most Notorious Child Murderers
25th Anniversary Edition | 17 October 2018 | Published by Waterside Press | Paperback

A ‘lost work’ is now finally back in print.

“The Murder of Childhood” describes Ray Wyre’s ground-breaking work with sex-offenders and tells the disturbing story of child serial-killer Robert Black. Drawing on Ray’s audio-recorded interviews with Black, and with unique access to the nationwide police investigation, the book paints a troubling picture of how dangerous paedophiles like Black were left free to target and abuse their victims. It is now:

For this new and updated edition, Ray’s widow, Charmaine Richardson, has written a powerful call for his work to be continued, while original co-author Tim Tate has meticulously re-visited both Black’s story and reveals continuing problems in the investigation and treatment of sex offenders. The new edition includes:

Wyre was the only person Black opened-up to – not to the police, courts, his lawyers or anyone else. It analyses his murders of Susan Maxwell, Caroline Hogg and Sarah Harper (as well as his implied confession to Wyre of killing Genette Tate).

Critically the authors challenge the failure of government to enhance child safety by abandoning the pioneering treatment of sex-offenders, developed by Wyre to protect future child victims.

‘A tribute to the extraordinary skill of Ray Wyre… who possessed a unique ability to enter the mind of offenders and by doing so provide the evidence which would bring to an end years of offending and unsolved crimes.’ Richard Monk, Commander, Metropolitan Police and UN Police Commissioner in Bosnia and Kosovo (Review of 1st Edition).

Tim Tate is an award-winning documentary film-maker, investigative journalist and best-selling author, who worked with Ray Wyre for 20 years.
Charmaine Richardson is a survivor of childhood sexual abuse who married Ray Wyre in the late-1990s. Her life with him forms a central part of her own 2018 book, Pick Up the Pieces (Please see or request separate Press Release).

All enquires or to put in touch with the authors please contact:
Bryan Gibson on 01256 882250 or use our contact page to send an email