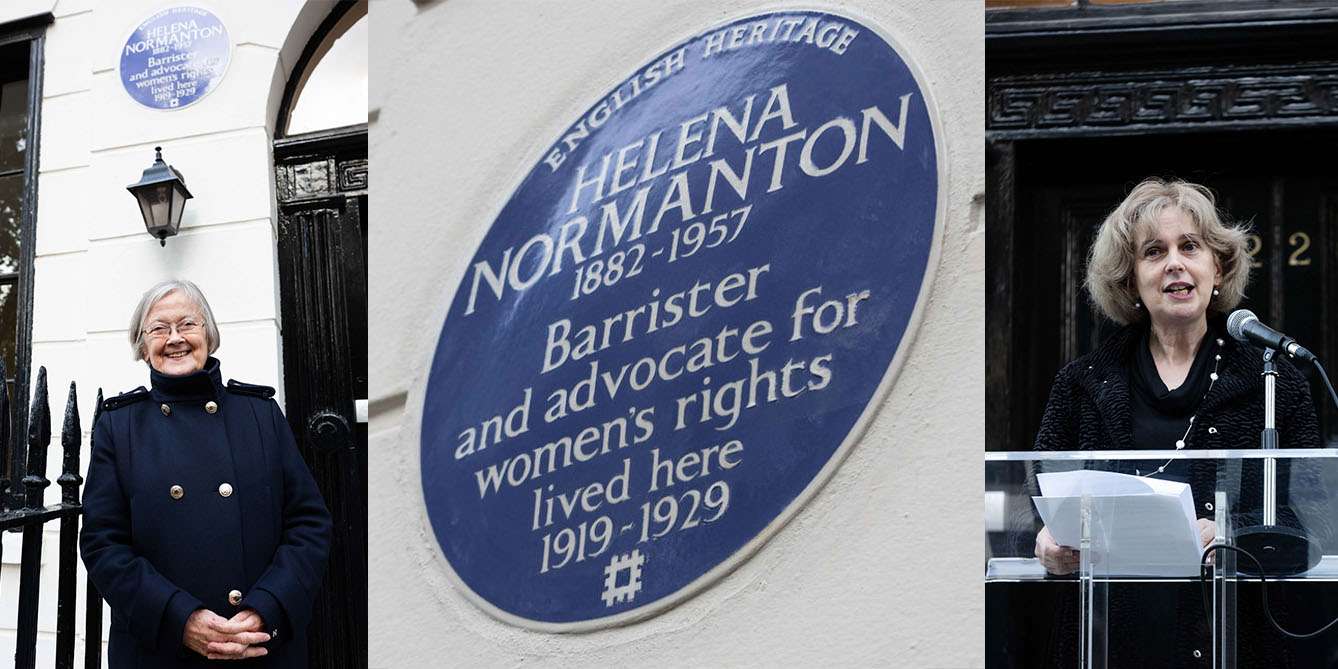 Lady Hale and Judith Bourne at the unveiling of a Blue Plaque to commemorate Helena Normanton. Photos Jennifer Moyes.
It could not have been more fitting that The First 100 Years Project and London’s renowned Doughty Street Chambers should come together on 20 October 2021 to honour pioneering barrister Helena Normanton. More so that England’s first woman President of the Supreme Court Baroness Brenda Hale, a sentinel of women’s rights, should be the person to unveil the English Heritage Blue Plaque at Normanton’s long time home a stone’s throw from those chambers in Mecklenburgh Square.

Helena Florence Normanton – whose story is fondly told in Judith Bourne’s Helena Normanton and the Opening of the Bar to Women – was the first woman to be admitted to an Inn of Court (Middle Temple), to practice at the Bar, to appear in the High Court of Justice and Old Bailey, and one of the first two women to be made a member of King’s Counsel (Rose Heilbron being the other). Judith Bourne writes about how Normanton acquired the burning ambition to challenge sex discrimination and become a lawyer aged 12 after seeing her mother patronised by a solicitor whose advice was being sought in the aftermath of her father’s untimely demise. That Helena Normanton’s stellar achievements in the male dominated legal world would be celebrated in this way could never have been more distant at that time. Or that in the 21st century she would be one of just five ‘illustrious women’ awarded a blue plaque alongside Diana, Princess of Wales. Or share in a further first when a range of female legal attire was named after her and Ivy Williams her contemporary, i.e. Ivy & Normanton ‘the first legal outfitter specialising in court wear for women in the legal profession.’

Doughty Street women, whose ranks include notable lawyers, have become the torchbearers for Helena Normanton’s strong and inspiring legacy. The original application to English Heritage was filed by barrister Megan Hirst, who has described Normanton as an ‘icon.’ This she did on behalf of women at Doughty Street and the ground-breaking First 100 Years Project, which is supported by the Law Society, Bar Council and others, to chart the journey of women in law across the last century.

According to Judith Bourne, who joined the celebrations:

‘Helena battled prejudice throughout her professional and personal life… she faced a constant struggle to establish herself against a backdrop of prejudice, misogyny and discrimination… but was a force to be reckoned with and achieved great things.’

How great a force and how immeasurable those achievements only became truly evident on this rather special occasion which was also attended by Helena Normanton’s deservedly proud descendants.

Read on: Find out more about Judith Bourne’s Helena Normanton and the Opening of the Bar to Women.