A Caricature of Upper Prison

Kindle:
Can be read offline on Kindle devices plus any computer, laptop, tablet or smartphone for which the free Kindle app is available; or online via any web browser.

Kobo:
Can be read offline on Kobo devices plus any computer, laptop, tablet or smartphone for which the free Kobo app is available; or online via any web browser.

This covers most devices (including Apple, Android and Windows phones and tablets) but please check the seller's website when making a purchase.

Plus other sellers - search the web by format: EPUB | PDF

Following the fall of African dictator Idi Amin, remnants of his army were rounded-up and thrown in jail. John Pancras Orau, a member of Amin’s Ugandan Air Force was one of these men. He saw first-hand the privations, isolation, hunger and humiliation in what were little more than concentration camps. In this book he describes the uncertainty and arbitrary punishments that—alongside fear that prisoners might just ‘disappear’ —were part of daily life. A true story of hope and belief, Amin’s Soldiers is a masterpiece of tragicomic writing falling somewhere between Catch 22 and Animal Farm as The Chieftain and his Brains Trust of fellow inmates try to govern themselves against a backdrop of prison gossip, rumour, misinformation and ever-changing rules. Yet it is not without a rich vein of humour as prisoners set up shops, cafes, entertainment, salvage teams and work on dubious escape plans. Equally comical are the ruses, subterfuge and corruption that become endemic as guards and prisoners seek to outwit each other. For more serious students of imprisonment, the book is about crime and punishment in a fluctuating political landscape – about ordinary people whose only real offence was being left on the wrong side of history. It is also a true story of belief and survival.The book came about as a result of links between the Anglican Diocese of Winchester and the Church of Uganda.

‘The last time I saw John Orau he was sitting in his tiny bookshop in Uganda wiling away his time reading. I asked how many he had sold today, he thought hard then answered, “None”. “And yesterday?” “None, either”. He was writing this book and his only ambition was to one day see it in print’: Reverend Gordon Randall.

‘A fascinating story, beautifully told, with episodes that are common to prisons the world over … I’m enjoying it enormously… It is a remarkable story in lots of ways, both the book itself and how it came to be published. The book itself is full of thought-provoking material – about power, politics and justice, about how to survive in prison; about the characteristics of prison guards; about Africa. It is written in distinctive style, simple, unaffected and uncompromising, and all the more effective for that. Chapter 2 reminded me of The Canterbury Tales‘: David Faulkner

John Pancras Orau was born in Pallisa, Eastern Uganda. He quit priestly training to join the Ugandan Air Force but as President Amin was swept from power his career was cut short. After spending over two years in prison, he worked for Uganda’s New Vision daily newspaper. 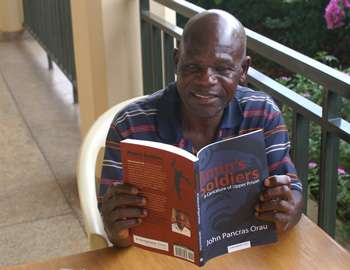 Photo of John Pancras Orau taken by Papa Keith Price on a visit to Uganda.

Be the first to review “Amin’s Soldiers” Cancel reply